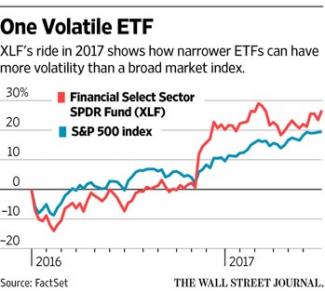 One thing investors in exchange-traded funds should know: The time of day makes a difference.  By not trading at the open or close of the market, investors improve their chances of minimizing transaction costs paid on ETF trades.
By Michael A. Pollock, WSJ.  July 10, 2017       Can you 2x your business in 3 years?  Click here.

Exchange-traded funds in the U.S. turn 25 years old next year, and the rapidly growing ETF universe continues to eat into traditional mutual-fund investing.

But while investors are trading ETFs more actively than ever, are they doing it more smartly? The answer, according to the pros, is too often no.

Overwhelmed by the swelling number of ETF choices, investors sometimes take shortcuts. They pick those just with the lowest fees or the strongest recent returns. Then, because ETFs are so easy to buy and sell—unlike their mutual-fund cousins, they can be traded all day on exchanges, like stocks—investors impatiently dump the laggards and move on to something else.

For all of these reasons, the returns that investors earn in ETFs often can lag behind the performance of the ETFs themselves.

As ETFs continue to attract more investor dollars, this may be a good time to step back and look at how to choose, trade and manage ETFs more safely:

1. Don’t get caught up in the buzz

Aiming to gain an edge in a competitive field, financial firms create high-sounding labels for ETFs, such as “smart beta,” “strategic beta” and “alternative beta.” Such terms usually mean that an ETF weights the stocks in its basket based on something other than market cap or that it employs a proprietary strategy to try to trim risk or beat the broad market.

Smart-beta funds can beat the market, at least for a while. But because their specialized strategies move in and out of vogue, stretches of good performance are frequently followed by lackluster returns, says Phil Bak, chief executive of Ann Arbor, Mich.-based ETF provider ACSI Funds and a former head of ETF listings at the New York Stock Exchange. What happens when a strategy becomes too popular is that the underlying stocks of the ETF become expensive, and the strategy then begins to underperform. Institutional players and professionals are continually rotating in and out of certain strategies, shifting to ones they believe are undervalued and due for a rebound.

Dividend-focused ETFs, which did well in part of 2015 and last year, haven’t fared as well lately for this reason, Mr. Bak says.

People need to consider whether their investment-time horizons are long enough to justify owning an ETF whose performance could vary widely over several years.

2. Pick your spots when trading

In theory, an ETF’s net asset value should closely track the value of the stocks it holds. But the two can diverge more than usual at certain times of day—such as early, before some stocks have opened at 9:30 a.m. ET, or near the 4 p.m. close, when a rush of late orders can cause heightened volatility.

By not trading at the open or close, investors improve their chances of minimizing transaction costs paid on ETF trades, says Joel Dickson, Vanguard Group’s global head of investment research and development. He and others also advise using limit trades—specifying in advance the lowest price for a sale or highest price for a buy that you’re willing to accept.

Limit trades can be useful for a value play, such as trying to buy below where an ETF has been trading. But an alternative that offers price protection and better assurance of getting a trade done is a marketable limit order.

Because markets have been calm recently, investors may question the value of giving up some price certainty in exchange for better execution, says Michael Iachini, who heads manager research at Charles Schwab Investment Advisory Inc. But volatility will rise again, and marketable limit orders can protect investors against abrupt changes in price just as they are entering a trade, Mr. Iachini says.

3. Give diligence its due

It may be tempting to skip fund literature and just choose the ETF with the lowest expense ratio, says Todd Rosenbluth, head of ETF and mutual-fund research at New York-based financial-analysis firm CFRA. That could be a mistake: Performance can hinge much more on what is in the underlying index than on a small difference in fees, he notes.

Vanguard FTSE Developed Markets ETF (VEA), with an expense ratio of 0.07%, and iShares Core MSCI EAFE Index (IEFA), at 0.8%, are similar funds. But the iShares fund, which has more French and German stocks and no exposure to Canada, has gained nearly 15% this year, compared with about 14% for the Vanguard ETF, Mr. Rosenbluth notes.

People often create ETF portfolios by first buying a broad fund such as SPDR S&P 500 ETF (SPY) and then surrounding it with more-specialized ETFs, or “satellite positions.” But commonly, returns on the satellite positions lag behind the return from the S&P, says Jay Batcha, a Traverse City, Mich.-based adviser whose firm, Optimal Capital, guides other advisers on ETF strategies.

Avoid picking those ETFs that have sizzled the most lately, says Mr. Batcha. It’s also important to understand that the narrower an ETF’s strategy, the more volatile it can be, Mr. Batcha adds.

This year, investors poured into Financial Select Sector SPDR Fund (XLF), believing that banks generally would benefit from deregulation and rising interest rates. At one point in June, it was up only marginally for the year while the S&P was up 8%. Then it surged to catch up to the S&P. How volatile has it been? It has a beta of 1.5 over the past year, which means it has been 50% more volatile than the S&P 500. For the past three years, the fund was only 12% more volatile than the S&P. The heightened volatility may reflect shifting investor expectations about what the Trump administration will do in terms of financial deregulation.

5. Figure out the factors

Mr. Batcha says having more factors tends to smooth performance over a market cycle. Among ETFs he likes is Reality Shares Divcon Leaders Dividend ETF (LEAD), which uses seven factors to spot companies most likely to raise dividends, according to its fact sheet.

But steer away from ETFs whose strategies aren’t well-described in literature, says Mr. Bak of ACSI Funds.

“If, after a half-hour, you are still scratching your head and trying to figure out when an ETF might or might not do well,” he says, “perhaps that investment is too complicated for you.”

Mr. Pollock is a writer in Ridgewood, N.J. He can be reached at reports@wsj.com.