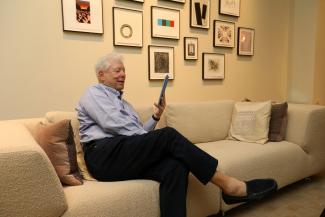 Nobel in Economics Is Awarded to Richard Thaler

Professor Thaler is the rare economist to win a measure of fame before winning the prize. He is an author of a best-selling book, “Nudge,” about helping people to make better decisions. He also appeared in the 2015 film “The Big Short,” delivering what is surely one of the most widely viewed tutorials in the history of economics, on the causes of the 2008 financial crisis.

The Nobel committee, announcing the award in Stockholm, said that it was honoring Professor Thaler for his pioneering work in establishing that people are predictably irrational — that they consistently behave in ways that defy economic theory. People will refuse to pay more for an umbrella during a rainstorm; they will use the savings from lower gas prices to buy premium gasoline; they will offer to buy a coffee mug for $3 and refuse to sell it for $6.

The committee credited Professor Thaler, who teaches at the University of Chicago Booth School of Business, for moving economics toward a more realistic understanding of human behavior, and for using the resulting insights to improve public policies, notably a sweeping shift toward the automatic enrollment of employees in retirement savings programs.

“In order to do good economics, you have to keep in mind that people are human,” Professor Thaler said at a news conference after the announcement.

Asked how he would spend the prize money of about $1.1 million, Professor Thaler replied, “This is quite a funny question.” He added, “I will try to spend it as irrationally as possible.”

The economics prize was established in 1968 in memory of Alfred Nobel by Sweden’s central bank and is awarded by the Royal Swedish Academy of Sciences. One of Professor Thaler’s frequent collaborators, Daniel Kahneman, was awarded the prize in 2002. Another behavioral economist, Robert J. Shiller, who was among the winners in 2013, hailed Professor Thaler on Monday as “one of the most creative spirits in modern economics.”

Mainstream economics was built on the simplifying assumption that people behave rationally. Economists understood that this was not literally true, but they argued that it was close enough.

Professor Thaler has played a central role in pushing economists away from that assumption. He did not simply argue that humans are irrational, which has always been obvious but is not particularly helpful. Rather, he showed that people depart from rationality in consistent ways, so their behavior can still be anticipated and modeled.

“Thaler more than anyone has disciplined the idea of animal spirits,” said Cass Sunstein, a Harvard law professor who wrote “Nudge” with Professor Thaler. The 2008 book argued that governments could use behavioral insights to improve the efficiency and quality of a wide range of public services. Two years later, the British government created a department to pursue the experiment. Other countries, including the United States, followed suit.

Some nudges are relatively minor. The British government found that people were more likely to pay automobile registration fees if billing letters included a picture of the vehicle. Other nudges are far-reaching. Observing that inertia limited participation in beneficial programs, like retirement savings plans or school lunch programs, Professor Thaler proposed that governments and employers should make participation the default option. People are free to opt out, but inertia is on the side of the preferred outcome.

A similar proposal, “Save More Later,” offsets the tendency to place a relatively high value on current income by allowing people to commit to setting aside more money next year.

Professor Thaler, 72, was born in East Orange, N.J., and graduated from Case Western Reserve University before earning a doctorate in economics at the University of Rochester in 1974. At the time, the field was gripped by an enthusiasm for the assumption that people are rational actors. An indicative and prevalent piece of economic reasoning asserted that ordinary people would adjust their spending habits whenever the government adjusted fiscal policy because they would foresee the consequences.

Professor Thaler has written that he began to have “deviant thoughts” in graduate school. He would ask people about their actual choices, an exercise that most economists regarded as irrelevant, and he found that the answers he got were different from what was in textbooks.

His career was shaped by his discovery of the work of Professor Kahneman and his longtime collaborator, Amos Tversky, who were advancing the idea that economics needed to grapple with actual human behavior. Professor Thaler became their collaborator and played a central role in bringing the work into the economic mainstream.

In 1995, Professor Thaler joined the faculty at the University of Chicago, the institution most associated with a rationalist approach to economics. “I knew I was going to be in for a fight and I thought it would be good for me and good for them,” he said in an interview on Monday. “The best way to sharpen your skills is to play against the best.”

Professor Thaler’s academic work can be summarized as a long series of demonstrations that standard economic theories do not describe actual human behavior.

For example, he showed that people do not regard all money as created equal. When gas prices decline, standard economic theory predicts that people will use the savings for whatever they need most, which is probably not additional gasoline. In reality, people still spend much of the money on gas. They buy premium gas even if it is bad for their car. In other words: They treat a certain slice of their budget as gas money.

He also showed that people place a higher value on their own possessions. In a famous experiment, he and two co-authors distributed coffee mugs to half of the students in a classroom, and then opened a market in mugs. Students randomly given a mug regarded it as twice as valuable as did the students who were not given a mug.

This “endowment effect” has since been demonstrated in a wide range of situations. It helps to explain why real markets do not work as well as chalkboard models.

One of Professor Thaler’s most profound findings involves the importance of fairness. He showed that people will penalize unfair behavior even if they do not benefit from doing so.

This has important economic implications. It explains, for example, why an umbrella store may choose not to raise prices during a rainstorm. It also illuminates the mechanics of unemployment. Standard economic theory predicted that during an economic downturn, employers would cut wages to a level consistent with the demand for goods or services, meaning there was no reason to think a downturn would produce unemployment.

But workers regard wage cuts as unfair. And so employers, seeking to avoid angering the workers they plan to keep, prefer to cut employees rather than wages.

In a presidential address to the American Economic Association in January 2016, Professor Thaler predicted behavioral economics would succeed so well it would eventually disappear.

“I think it is time to stop thinking about behavioral economics as some kind of revolution,” he said. In time, he added, “all economics will be as behavioral as the topic requires.”