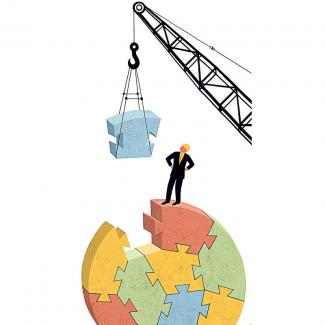 Active or Passive? Why You Should Use Both

Active or Passive? Why You Should Use Both
For an optimal portfolio, you need both strategies. Here’s how to get the right mix.
By Reshma Kapadia

Active versus passive: The fund industry has been astir for quite some time over which is the better strategy for long-term investors. The debate has spawned side arguments, such as whether some passive funds are really active management in disguise, or whether the debate should be reframed along the lines of high-cost versus low-cost funds.

Here’s the good news: We aren’t going to rehash any of that here. The active/passive debate has misdirected the attention of many investors, and has led even financial advisors to think they must make an all-in decision on one or the other. So here’s more good news: You don’t. For an optimal portfolio, think in terms of active and passive.

A bundle of new research points to useful strategies for using active or passive funds. Perhaps there’s no better emissary of negotiating this peace than Vanguard Group. The firm, long known for its index products, has $2.9 trillion in index funds, including $757 billion in exchange-traded-fund assets. But Vanguard also has $1 trillion in actively managed mutual funds, making it larger than most well-known active shops.

“Although some investors may view the active-passive decision as all or nothing, it’s more nuanced,” says Daniel Wallick, a principal in Vanguard’s Investment Strategy Group and co-author of a white paper on the topic. Vanguard’s latest research gives investors a sense of how much active management could be right for their portfolios based on key factors. “The right amount of active comes down to three things: the ability to pick above-average managers, cost, and investors’ risk tolerance, or patience in holding active managers through their ups and downs,” says Wallick.

According to Vanguard’s matrix of these factors, based on 10 years of data, the more risk-averse an investor and the more difficulty they may have in choosing a low-cost, top-performing active stock manager, the less they should have in active funds. The more risk an investor can stomach and the better they are at finding low-cost and top-performing funds, the higher the allocation.

VANGUARD’S MATRIX aims to help investors target the right mix of active versus passive funds in their portfolios. New research from Goldman Sachs aims to pinpoint which areas of the market—and your portfolio—are best served by passive or active funds.

There are a number of considerations: breadth of product offerings, the performance gap between active and passive managers, and the age of the market cycle.

“It’s an art, not a science,” says Theodore Enders, head of portfolio strategy at Goldman Sachs Asset Management, who recently researched the topic. Before buying an ETF, he says, investors, especially large ones, should make sure there are at least 10 ETFs with $10 billion in assets in any given category, and that the two biggest don’t hold 80% or more of the assets. Categories that don’t have that depth include bank loans, convertibles, municipal bonds, and foreign small- and mid-cap stocks.

Clearly, performance is a factor, and U.S. stockpickers haven’t fared well against the Standard & Poor’s 500 index for many years. But that poor relative performance has been wrongly extrapolated to other areas of the market. Active managers have outperformed comparable ETFs in foreign blend, energy limited partnerships, bank loans, and high-yield bonds since the inception of those ETFs. In high yield, for example, three-quarters of active managers beat the largest comparable ETF over the life of the ETF.

One gauge for whether to use active or passive is to see if the index underlying the ETF is representative of the way active managers are investing—seen in part by how far active managers stray in their positioning from the benchmark, says Alex Bryan, an analyst at Morningstar.

In bonds, for example, active and passive investors’ positioning diverges meaningfully. The broad benchmark index is capitalization-weighted, which means the biggest debt issuers make up the largest portion of the index. It’s also more reflective of the Federal Reserve’s bond buying and banks’ purchasing of bonds to meet regulatory requirements for higher capital reserves after the financial crisis—and not an indication of investors seeking the best returns. Active managers focused on returns have taken on credit risk and opted for shorter durations to protect against a rise in interest rates. Those bets have paid off, with a whopping 75% of active intermediate-term bond managers beating the index in 2016, according to Morningstar.

The bond market presents a rare opportunity for true active management in an ETF. There are several good options here, including the Pimco Active Bond ETF (ticker: BOND), which has outperformed its mutual fund counterpart since its start in 2013. There’s also Jeff Gundlach’s SPDR DoubleLine Total Return Tactical ETF (TOTL), which has 40% less in government bonds than its intermediate-term bond peers. “Active ETFs give you some flexibility and let someone who has a history of being smart take over, at a lower cost than a mutual fund,” says Jay Batcha, chief investment officer at Optimal Capital, which helps advisors with portfolio construction.

Emerging markets and small-cap stocks are two areas where investors often favor active management, with the expectation that they will be more likely to unearth gems or sidestep disasters.

In the case of emerging markets, there’s reason to go active, but use caution. One knock on passive is that major indexes are tilted towards huge, state-owned enterprises, whereas the real growth is in smaller, consumer-driven businesses, where most active managers focus. But emerging market funds have a wide dispersion in performance—as much as 10 percentage points or more between the top and bottom quartile of funds. So picking the right fund can lead to benchmark-beating performance, but it’s also all too easy to choose the wrong fund.

As for small-caps, the data don’t back the standard argument for active management. Over the past five years, 55% of active small-cap managers underperformed the Russell 2000, and fared even worse against the S&P 600, according to Morningstar. The $30 billion iShares Core S&P Small-Cap ETF (IJR) and the $19 billion Vanguard Small-Cap ETF (VB) are popular passive options and are well-diversified, with the top 10 holdings accounting for 5% or less of the fund’s assets.

AS THE AGING BULL MARKET continues to push to new highs, even investors who embrace passive investing are going active. “Passive strategies do better in the early to the mid part of a business cycle, when the market is coming out of a trough or the economy is coming out of a downturn. The importance then is to be on the bus,” says Darrell Cronk, president of Wells Fargo Investment Institute. “As the cycle ages, it’s more important to have active strategies, because stock correlations begin to fall.” That gives stockpickers a chance to find companies poised to do well and avoid those likely to struggle.

In fact, large-cap active managers have fared better than the index in the first half of this year. Vanguard compared a portfolio of the 20 best-performing U.S. active stock funds over a 15-year period with one that was split between those same 20 funds and four broad U.S. total-market index funds. The all-active portfolio beat the total-market stock index by four percentage points a year, compared with just two points for the mixed portfolio, though the hybrid offered a less volatile ride.

Even ETF adherents are increasingly embracing products that are based on an index that employs a lot of active decision-making. These ETFs use factors like earnings quality, value, or momentum, rather than size, to determine a stock’s weighting. Factor ETFs can look very different from the broad market.

For example, the $13.7 billion Guggenheim S&P 500 Equal Weight ETF (RSP) invests in the same stocks you’ll find in the $243 billion SPDR S&P 500 (SPY). But where the S&P weights each company according to its market value, the Guggenheim ETF allocates the same amount of money to each stock. That means it has about 0.25% in each of the FANG stocks, while the SPDR S&P 500 has more than 3.8% in Facebook (FB) and Amazon.com (AMZN) alone. The $500 million iShares Edge MSCI Multifactor USA ETF (LRGF), which weights stocks using quality, size, value, and momentum, also skews toward cheaper and smaller stocks, and is another option for those skeptical about the bull market’s longevity.